Ruben Brave's speech at the signing of the Diversity & Inclusivity Charter 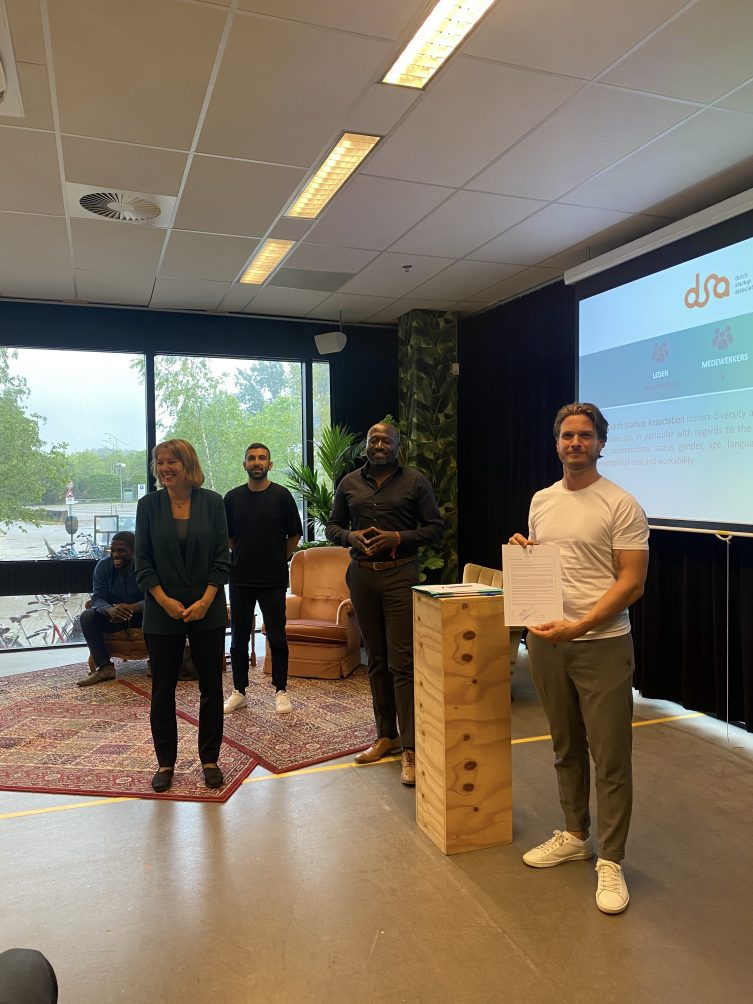 On July 9, 2020, DSA signed Diversity & Inclusivity Charter with “Diversity in Business” of the Social and Economic Council (SER). Ruben Brave, Board Member and Treasurer at DSA, gave an excellent speech for the occasion:

Welcome again to the signing of this charter by the DSA with “Diversity In Business” of the Social and Economic Council (SER). Thank you for your presence here to celebrate this important step of the dSa.

My name is Ruben Brave and I am a board member, treasurer, at the Dutch Startup Association. On behalf of the other board members, Rinske Brand (secretary) and chairman and co-founder of the dSa Lucien Burm, I would particularly like to thank Thomas Vles our brand new director and Daria Malereva project manager at the dSa. Thanks also to the people of the SER, Alice Odé and last but not least Hussein Adam Dia who took the initiative to approach the dSa.

There are many reasons why the DSA considers it important to support diversity in startups - in the broadest sense of the word. I think Thomas has far better statistical arguments on why it's time to more consciously consider the lack of diversity in the startup ecosystem. Startups in general have quite a negative capitalist connotation for some, but I can say from personal experience that this is not entirely justified. Moreover, start-ups are the companies of the future and contribute substantially to our economy through employment and innovation, where large companies often fail to do just that. This is socially relevant. Working consciously on diversity within startups will not only enable startups to contribute to our prosperity, but also to our well-being. And by the latter I don't refer so much to the healthcare sector, but actually that part of the economy that has great value, but which cannot be expressed in terms of money.

My own company Entelligence is an academic business incubator, which means that in collaboration with knowledge institutions such as universities, I help scientists bring their invention or otherwise innovative scientific knowledge “to the market”. This transformation process from knowledge to market solution is called valorisation. A word that some scientists have difficulty with, but in any case, so-called spin-offs arise from this: the startups of the academic world.

Because I work intensively with scientists who often transform themselves from scholar to entrepreneur, I also get the chance to learn something every now and then. And it sometimes proves to be relevant not only for the company to be set up, but also for me personally.

There are two scientific theories that have had a major impact on my life as a startup entrepreneur but also as a person. The theory of "The strength of weak ties" by the American sociologist Mark Granovetter and "The Forms of Capital" by the French sociologist Pierre Bourdieu.

“Weak ties” are people who are not part of the regular network of strong bonds such as friends, family and derived relationships, but with whom you can exchange information that can accelerate you. "The Forms of Capital" is about the fact that we currently often rather narrowly think about capital in a financial sense only, and Bourdieu identified four other forms of capital in addition to economic capital (such as money and real estate): cultural, social, symbolic and linguistic capital.

With cultural capital you can think of knowledge, skills and education. In a rapidly changing society, developing yourself or your company is of lasting importance.

Social capital can be networks and relationships. Symbolic capital is about social recognition, such as prestige or honor. And mastering the language of the dominant culture is linguistic capital.

And there have also been recent additions such as spiritual capital which is related to meaning, personal growth, reason for being and perception of values.

How this became personally relevant to me I experienced in my contact with Michiel Boreel. Michiel is CTO of Sogeti, a sister company of Capgemini and I got to know him at IPAN, a kind of predecessor of the DSA. We always kept in touch and sometimes had a drink or a snack after some tech event where we met again. We always talked about startups and how they could contribute to society.

After selling some of my businesses, I had a sabbatical for a few years and started volunteering more. One of those volunteer activities involved filling the Radboud University database on the Surinamese Slave registers. Then I discovered that the Dutch noble family Boreel (from which Michiel Boreel is descended) was not only one of the co-founders of the V.O.C. but had also personally owned a plantation where my ancestors were "put to work". I confronted Michael with this information and he said that he would come back to it sometime.

One evening Michiel called me. Normally he was quite sure of his words, but then he talked somewhat stammering. You have to imagine that Michiel is a serious and robust guy with a voice like Ivo van Opstelten. Anyway, my suspicions were correct and Michiel sincerely apologized for what his ancestors had done to my ancestors and others. He was emotional and said he couldn't imagine "people did and still do those horrible things to each other." I thanked him for his words and frankly had to chuckle a little. But I accepted his apologies, for which he thanked me in return.

And when I told my mother the story, she became very emotional. She had known my grandmother whose mother was still enslaved. All the nasty family stories that had been told her surfaced once more in her mind and because she also knew the severe after-effects in the Surinamese society of the period after slavery, it meant a lot to her.

Michiel's apology had had a healing effect.

It is difficult to put into words the value that Michiel's apology, as descendant of the slave owners of my ancestors, has had for our family in general and me personally through the intergenerational traumas that continue to this day, and yes, even in my relationship with my white life partner still play a role. My white girlfriend, dear Merel, is a granddaughter of the Dutch Prime Minister who has personally signed the governmental document concerning the independence of Suriname, but who has never apologized for the role of the Netherlands in the Trans-Atlantic slavery in Suriname. Just like our current Prime Minister.

So if I hadn't engaged in or had access to startups and maintained the fragile but constant bond with Michiel, my weak tie, I would never have come across this valuable mutually cathartic information as well as access to this "spiritual" capital. And such an experience I truly wish for everyone.

Thank you for your attention."


Ruben Brave, Board Member of the Dutch Startup Association