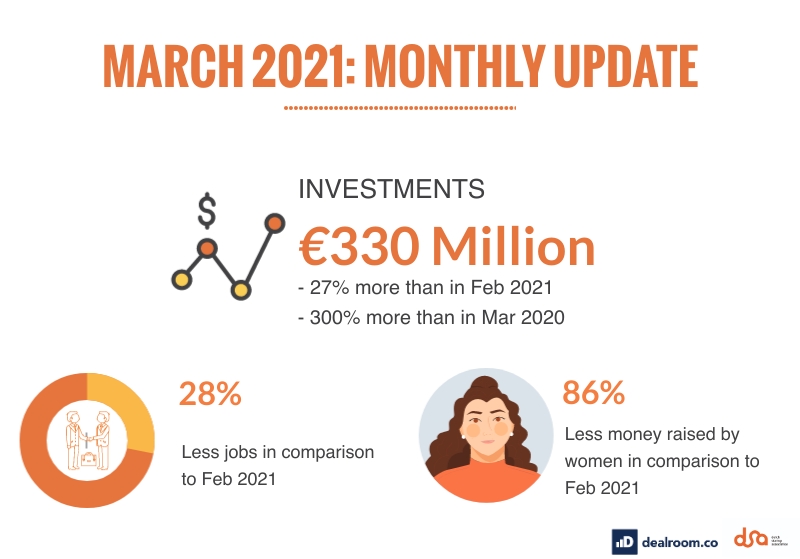 March 2021 has finished and with it, we are finally able to look back at what a whole year of living under the COVID-19 era has brought to the entrepreneurial ecosystem.

In this monthly update, we were able - thanks to our partner Dealroom - to compare and contrast the advances in the Dutch ecosystem. The monthly is made up of comparisons between February 2021 and March 2021, March 2020 with March 2021, Q1 2020 with Q1 2021, and how well the Dutch entrepreneurial ecosystem has performed in comparison to the Belgian one.

Although there were not that many pre-seed and seed rounds this month, there were a few late VC investments that raised more than 120 million euros in March only - making up one-third of the overall money invested this month.

Although there was a steep increase in money invested this month, we are not able to see similar trends in other parts of the ecosystem.

After a whole year of the COVID-19 pandemic, ecosystems were able to recover - and move forward.

Although both ecosystems were able to recover, the Belgian ecosystem performed better than the Dutch one.

Both Dutch and Belgian ecosystems, however, saw a sharp increase in the amount of money being invested in start-ups and scale-ups, with The Netherlands having a 300% increase and Belgium having a 500% increase, respectively.

The highlight of the month: Crisp

Crisp’s main goal is to increase the number of products being offered via their app whilst maintaining the quality of the product that they are known for.

March 2021: Diversity in the entrepreneurial ecosystem

Even though The Netherlands outperforms countries in terms of gender equality, there is still a lot of work to be done. Only 37% of Dutch entrepreneurs are women and only 1.6% of VC investments go to female entrepreneurs - as we can see in this monthly update.

The DSA believes that more should be done in this regard. You can read more about this in our Diversity and Inclusion Research published last year.

If you would like to know more about March 2021’s insights, please read our full entrepreneurship report that we prepared using data from DealRoom.